Strange question. Right? Few of us get that curious about music listening…

We have our favorite songs lined up to play one after the other. Organizing a playlist is fun. You can definitely arrange a list to get you going, build up your energy, get you deeper into a mood you like, etc. But who ever listens to more than one song at the same time? Not just a couple, try at least four or five…

If you are part of the New York City music scene, you have heard of the Music Building, located on Eighth Avenue in Manhattan, between 38th and 39th street, in the Garment District. Twelve floors, over 50 rehearsal studios, and some recording studios. 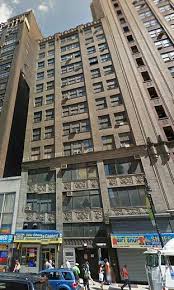 The recording studios have had a tough time surviving in that building. Even when they invest heavily in soundproofing. They have to deal with the fact that most of the rehearsal studios are not soundproofed, or not that well. The rooms were not designed to house rehearsal or recording studios. Cement floors and ceilings, cement walls, cements hallways and staircases. Metal doors leaving plenty of space for air and noise to escape around and under them. I was told the building was constructed to support the heavy machinery used during the heyday of the garment industry.

I spent a few years working, sometimes living, in the Music Building. At peak rehearsal hours, you could have a great many bands playing at the same time. Riding the elevator to the 11th floor, where I rented a studio, felt like you were spinning the dial on a radio but instead of switching from one song to the next, you were switching from multiple songs to multiple songs, as you passed each floor. And it wasn’t a clean switch. You were phasing in and out, yet never quite out. And very slowly… The elevators were slow. Especially the freight elevator, used when moving amps and drums, or when the regular elevator broke down.

On each floor, the door to the air shaft in the back of the building was often left open. You could access one of the building’s two staircases that way. Same with the second staircase. The doors to each floor were often wide open. So the sound travelled through the shaft and the staircases unabated. No matter where you were you got to hear your neighbors. And some of them were loud!!! And, I mean, LOUD!!! I once rented my room to a band, who’s name escapes me, but had as its members the drummer from the Ramones and the guitar player from the Plasmatics. These guys were insanely loud. I loved it.

They had the right idea though, because the only way to mask the noise from your neighbors and hear yourself, was to play loud, louder than your neighbors. As loud as you could as long as your singer could still hear himself or herself… Well, sometimes you could not hear the singer… So I purchased these huge speakers and the loudest amp I could afford. Small room though. So the feedback (that high pitch sound that kills your ears when a microphone faces a speaker) was hard to manage. You had to stand in that one place where the microphone and the speakers worked out their differences.

On hot days, or when the heat was on way too high in the Winter, windows would be opened wide and you could hear music reverberating between buildings up and down Eighth Avenue for a few blocks north and south of the building. My room faced Eighth Avenue. I opened the windows a lot. There were quiet times of course. You had to figure out the best time to record vocals, or acoustic guitar tracks. Sometimes you weren’t so lucky and in a middle of a great take someone would start practicing somewhere in the building. You’d have to redo the take when they took a break, or cancel the session altogether and try again later. 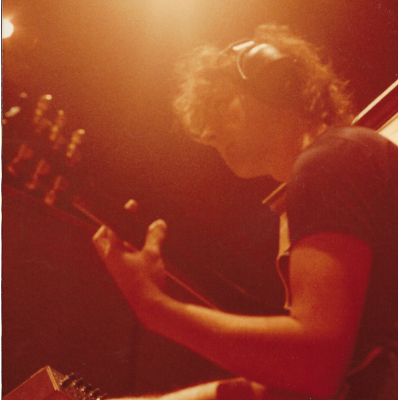 Amidst all the noise, I managed to write and record many songs. It was fun. The Music Building has been the home of so many talented folks. Some well known: Madonna, Blondie, Billy Idol, Metallica… I never ran into these fabulous folks myself. I had the chance to hear great music just hanging out on different floors and I was lucky to meet some great musicians with whom I collaborated and who became friends. You were always notified of upcoming gigs around town through posters in the building’s lobby or flyers left under your studio door. If you heard some good music while riding the elevators you could always knock on doors and ask when that band was going to play live and where.

I recorded four albums in various studios in the Music Building. And I rehearsed for two other albums that were recorded at Perfect Sound Studios and RCA Studios. At RCA we locked down five tracks that are available on my album RISING TIDE. You can tell we were playing loud then. Four out of these five tracks are definitely on the heavy side of rock. The rest of the album is on the soft-rock side. My EP, EASE UP, is definitely more mellow sounding. My last album RIDE THE WAVE has a balance of high energy tracks and softer ones. For a totally acoustic experience, I recommend checking out my EP, ONE VOICE ONE GUITAR VOL.1.

As a THANK YOU for being one of my subscribers I want to give you FOR FREE – no strings attached – THREE TRACKS:

If you like the tracks you might also consider checking out other tracks on RISING TIDE, on my EP, EASE UP, and on my album RIDE THE WAVE. The tracks feature musicians I had the pleasure to meet while listening to many, many songs all played at the same time.

So, how many songs can you listen to at the same time? Quite a few. Is it the exact definition of cacophony? A harsh discordant mixture of sounds? Yes and no. It depends on who’s playing. And it’s not just sounds. It’s organized sounds mixed with other organized sounds. It might be inspiring in some ways. Try it at home if you want. Play a different song on your TV, your smart phone, your PC, your stereo, your radio, or whatever listening technology you might have lying around… Let me know how that works for you… Include one of my songs and you will get the full effect of having walked around the floors of the Music Building when I was rehearsing there…