Jay Elle’s album, RIDE THE WAVE, was selected for the 2022 Grammy® Nomination Ballot for the Best Pop Vocal Album category. 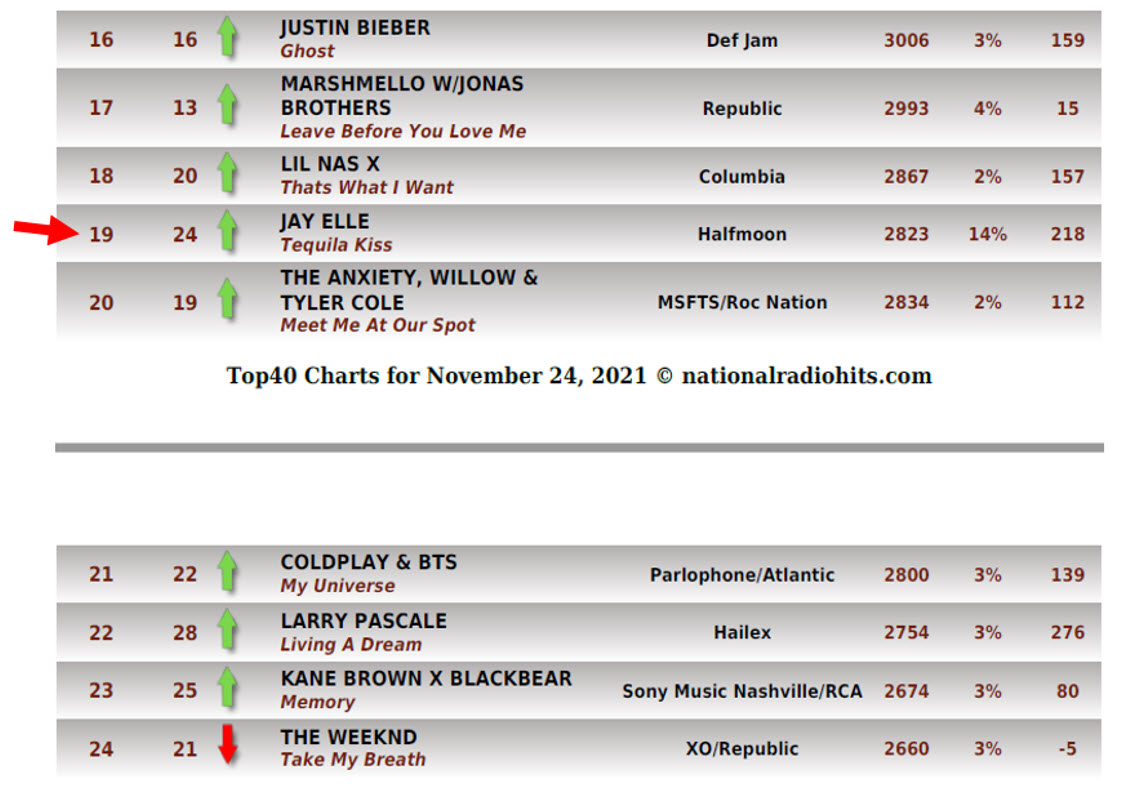 His soft inviting voice will uplift and soothe your spirits and his witty lyrics will provoke deeper thoughts about the world while sharing optimistic, positive, upbeat messages that will “have you carry on with your day with a smile”.

The result is amazing success worldwide, including rave reviews by over 40 blogs, magazines, DJs and radio programmers (Press) and chart topping songs across multiple genres:

“RIDE THE WAVE: Nominated for ALBUM OF THE YEAR. If you aren’t listening to Ride the Wave right now, you don’t know what you’re missing.” IndieShark

“This is a juggernaut of an LP… an instant classic in my book for sure.” Melody Maker

“This is a tremendous record… trustingly relatable.” Mobyorkcity

“The pandemic feels like one of those endless rainy days that I hated as a child. Boring!!!!!” says Jay Elle. “Back then, on rainy days I couldn’t go out. According to my mom, if I were to get my hair wet I would most certainly catch a cold. Apparently, everyone else’s mother thought so too. There was no one to hang around with on rainy days. At home, I was on lock down with the same old toys. No guitar then. No Internet. This new album is about how to best enjoy yourself while waiting for the sun to shine again.”

Whether he relies on pop, rock, or more intimate voice and guitar arrangements, Jay Elle obviously puts a lot of effort into crafting excellent lyrics with powerful messages. His latest release, the LP “Ride the Wave” focuses on sharing his way to deal with the pandemic. “I think that much of what we do in life is ride one wave after another, as best as we can. Some waves are fun to ride, like recording a new album, and some are tough. Riding a pandemic is no picnic. But what choice do we have? I take life as it comes, and ride the wave. As my friend Jett Harris reminded me, “Surfers are really cool interesting people and their philosophy on surfing is very similar to your analogy of waves and life. The adage “Luck is when opportunity meets preparation” is appropriate as you never know when you’re going to get the opportunity to ride that really great perfect wave, but you hope to be ready to take advantage of it. If not you’ll find sympathy in the dictionary between sh*t and syphilis.”

All of the songs on this new album are fun waves to ride. “Ride the Wave”, of course, and “Want Me Bad, “Miss Mess”, “Rainy Day”, and a song written for The Vampire Diaries actress, Nina Dobrev: “Tequila Kiss” (Instagram @nina). “I am a big fan of Ms. Dobrev. So, I wrote a song about my experience as a fan and follower: “Tequila Kiss”. I do think Nina is a terrific actress. If we ever meet, I would love to discuss how she prepares for a part. She is “all emotion”. And always very precise. And very entertaining, on screen and on Instagram.”

Music was always part of Jay Elle’s upbringing, especially at family gatherings and celebrations. And at home, the radio was always on.

His best friend from school, Philippe Blin, and a musical cousin both kindled Jay Elle’s musical curiosity when they showed him how to play a few chords on his guitar. But his lifelong obsession with the beauty and power of song accelerated when his aunt bought him a guitar of his own. According to Jay Elle, “I became more interested and dedicated more time to guitar playing and songwriting than other activities. I would get this spine tingling feeling when I heard certain songs, a blast of energy, like I could do just about anything. It felt hopeful and positive.”

The positive energy of music eventually lead Jay Elle to enroll at the Geneva Conservatory of Music, where he studied theory, composition, classical guitar, and singing. But Jay Elle’s heart was more attuned to popular music, and he soon joined a band and was quickly immersed in blues, rock, jazz and pop. “I listened to a lot of guitar heroes,” says Jay Elle. “Between the rigor of rendering a classical piece as it was written, and the open fields of blues or jazz improvisation, I feel that the pop song format is ideal if you can bring some of these elements together to serve a great melody and meaningful lyrics.”

His passion for blues, jazz, and pop lead Jay Elle to relocate to the country where it all began, the United States. Living in New York City opened up a lot of musical opportunities. After meeting singer/songwriter/producer Margaret Dorn (Bette Midler, Boz Scaggs, Judy Collins, Rosanne Cash), Jay Elle was soon playing guitar on her albums and co-writing songs with her. Jay Elle also worked closely with entrepreneur Bill Aucoin, best known for managing Kiss and Billy Idol. In New York, Jay Elle formed a jazz ensemble with composer/guitarist Byron Estep, who is perhaps best known as the executive director of Blue Man Group. Jay Elle’s time in NYC also lead to working with John Dubs (Front 242), who was instrumental in honing his production chops.

But although Jay Elle has been fortunate enough to work and learn from some important musical talents since landing in NYC, his focus, drive and passion has been creating and performing his own songs. In 2017, he released his first EP of original music, the critically-acclaimed “Rising Tide”, produced by veteran engineer Warren Schatz (Evelyn “Champagne” King, KC & The Sunshine Band, Vicki Sue Robinson).

In 2019, Jay Elle released a self-produced EP, “Ease Up”, mixed and mastered by Grammy nominated engineer/producer Brent Kolatalo (Lady Gaga, John Legend, Lana Del Rey, Bruno Mars, Ariana Grande, OneRepublic, etc.). “Ease Up” featured a collection of groovy, uplifting, guitar driven songs. All of the tracks presented a positive attitude toward a life event that Jay Elle experienced or witnessed. With “Ease Up”, Jay Elle stated, “I want to share optimistic and positive messages that focus on looking forward and moving on from imperfect situations. I’m optimistic about the future and I want to share that viewpoint.”

“‘Ease Up’ is full of extremely pleasant, well written and nicely arranged music. It has all the elements of great writing, melody, outstanding groove, excellent recording and a whole bunch of subtle, musical beauty. Let’s say that this recording has rekindled hope in me that there really still are artists out there who know how to make great melodic music.” jamsphere

“Jay Elle’s music is heartwarming, organic and nurturing. He also has this pizzazz to him that is beyond charming. In “Ease Up (Into Love),” one of the singles off of his new EP, Jay finds a way into our souls, blessing us with a gem that oozes with feel-good vibes.” ratingsgamemusic